Parenting from the Quran

People are divided into two main groups in their parenting to their children, which are:

A group who do not know any methodology to parent their children, and as a result of this parents make so many dangerous mistakes in raising up their children causing mental disturbances and hatred between children and their parents.

The other group of people follow theories and conjecture that are far away from the teachings of Islam and as a result of that they make so many dangerous mistakes in parenting their children.

This diagram shows the current status of people with regards to parenting their children. Such that people are divided into two main groups, which are:

Answer: In order that Allah (God) would teach parents from this the optimal methodology on how to parent their children. And Allah (God) emphasizes the point that the guidance of Luqman is from Allah (God) Almighty so that people would not question the validity of Luqman's teachings.

ALLah the Almighty teaches us how to parent children throughout their different stages, and from these stages is childhood and in this stage Allah (God) Almighty urges parent to emphasize the following qualities in their children:

2. Asking about what they see and hear: Allah (God) urges parents to enforce the quality of making children to think and ponder about what they hear and see by engaging them in constructive conversations and illustrations. This results in an increase in the number of neural connections in the human brain and the speed of neural signaling, which results in an increase in the intelligence of the child.

And if parents do not do this it would cause the children to have a reduced intelligence. 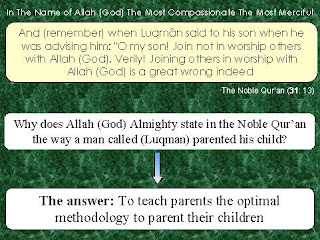