Brain and Kusyu’ in solah

What happened when one prays and has an indeed kusyu’ solah? 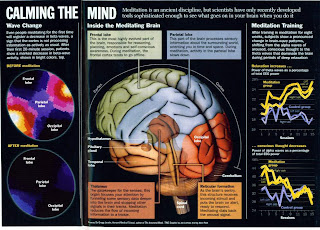 Well, when people perform solah, the frontal lobes are highly active, increasing beyond their normal state. This is the area of the brain that controls our state of attention. It is well known that prayer "experts" around the globe are intensely focused and in a state of high attention when they pray.

The second things that occur when people pray is a decrease of activity in the posterior parietal areas of the brain. This is the part of the brain that gives us our sense of self, separates everything "outside" of us, from us, and gives us a sense of individualism. Also it is the part responsible for spatial orientation. Studies with regards to brain and meditation have confirmed this phenomenon.

Solah is to detach oneself from desires and objects by offering full submission to Allah the AlMighty and effectively separate oneself from the transitory nature of the world. This is undeniably a mental effort. In addition, our body has its own way of communicating outwardly to the world and inwardly to oneself. How we position our body has a lot to do with what happens with our mind and our breath. In Solah, we move our muscles in sequencing and repetitive manner accompany by rhythmic recitation of the quranic verses which is again a mental activities and physiological efforts. The correlation of physical states with mental states in solah reinforces the correspondence between neural functions and behavior.

This is so because during Solah there is "an increase in the areas of the [cerebral] cortex taking part in perception of specific information and an increase in the functional relationship between the two hemispheres". These observations support the cognitive claims of the "mindful state" in Solah by showing an increase in functional awareness. Performing solah is believed to result in increased EEG coherence, blood flow to the brain, muscle relaxation, and a decrease in stress hormones (see http://info.miu.edu/tm_research/tm_charts/1Phys.html).

In addition, neurobiologist James Austin suggests that the decrease in respiration (during solah) reduces neuronal firing in the medulla, most likely through corollary discharges from the central pattern generator for the diaphragm to the brain. The inhibition of the medulla causes alteration of higher-level functioning because when it is inhibited, it cannot inhibit higher functioning. Austin also claims that mental "transition periods" increase, shifting "rhythm of entry into activated states," in addition to fashioning different roles for other neurotransmitters. The alterations in bodily rhythms are consistent with the observed effects on neuronal responses in meditation. Additionally, the effect on neurotransmitters explains how set-points for mood can change, if recent research suggesting roles for dopamine and serotonin in mood is accurate. Solah could also do some of the work of the psychotropic drugs that either block or facilitate the uptake of certain neurotransmitters.

A different study suggests that daily meditation can alter the physical structure of the brain and may even slow brain deterioration related to aging. Study condcuted by Sara Lazar, a research scientist at Harvard Medical School's Massachusetts General Hospital, showed that parts of the brain known as the cerebral cortex were thicker in 20 people who prayed, compared with 15 people who did not pray. She presented the study at Neuroscience 2005, the annual meeting of the Society for Neuroscience. It also appears in the journal NeuroReport issued that year.