Healing from the Quran: Medicine of Information 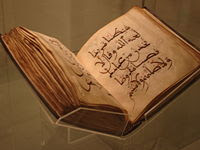 Healing from the Quran: Medicine of Information By: Abduldaem Alkaheel

This research is the result of the work of three years of search, study and experiences and lead to put the scientific foundation of “Healing by the Qur’an” as well as to proof the new miraculous face of the Qur’an, which I call:
“The Healing Power of The Qur’an” moreover it leads to discover a new kind of medicine, which I name: “Medicine Of Information”

Yes, healing by Qur’an is a 100% real and true act! It was proven to me with certainty that the Qur’an can heal from all kind of physical, psychological, evil effects, worries, envy, magic .. etc.
So, let us start together putting the scientific foundations for this most effective and powerful kind of healing, maybe we can convince our doctors and medical scientists of this amazing kind of healing!
I should mention that I referred to 27 international scientific sources. 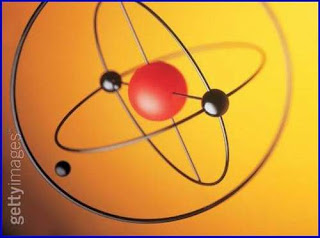 The Atom is the essential construction unit for the Universe!
When we give a good look at the Universe, we find it composed of atoms and each atom of the Universe is a continues state of vibration.

Everything is done in the brain 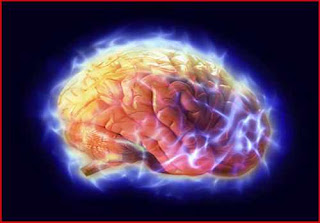 Inside the brain there are more than 1000’000’000’000 “Million millions” of cells, each cell is an amazing complicated computer working with the other cells perfectly and continuously without rest and non stop!

Electromagnetic waves sent by the Brain.

The Cell is the Unit of Body Construction 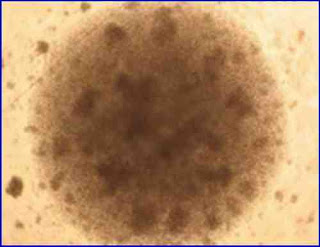 All cells of the body, without exception vibrate, which means that they are affected by all kind of vibrations mechanical, electrical and magnetically!

Healing by Sound
New methods for healing appeared to replace the actual methods, one of the most important is healing by sound. In this field researchers found out that the voice of the human being has a very effective and positive effect for healing many different kinds of illness and important health problems like cancer. But the question is: how sound can help in healing and curing health problems, and do all kind of sounds heal ? 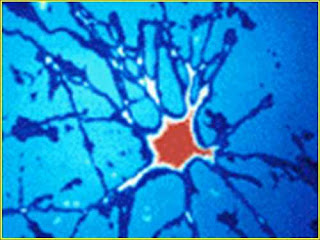 A NERVIOUS CELL VIBE BY SOUND
In the Qur’an hearing comes before sight, it might be a sign of the importance of sound for healing. 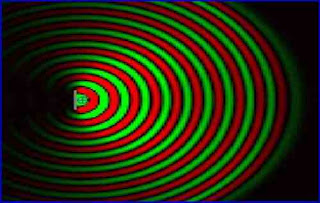 Sound is waves dispersed (diffused) in the air
Sound move in the air with a speed of 340 meters/second, and it consists of vibrations coming out of the throat and spread in the air until reaching the ears, then it goes through the ears to all parts of the body.

The mechanism of hearing in the human being 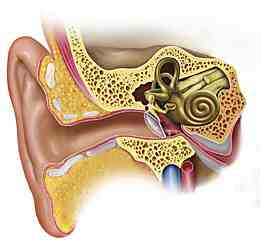 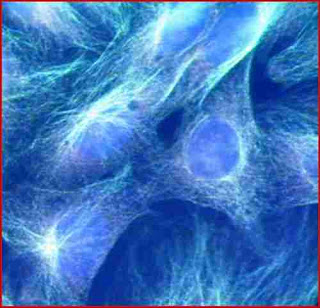 The cell is affected by the sound vibration, and it goes with it by changing its own vibration, which means that the mechanical work of the cell could increase and be stronger to resist viruses when we influence it by certain limited vibrations.

Scientific Experiences
Some scientists and researchers did, for more than 50 years, many experiences on the effect of the sound on the healthy and sick cells of the human being, and they reached an important result that some sound vibrations affect cancer cells and destroy them, while in the same time they affect the healthy cells and strengthen them beside increasing their activities! 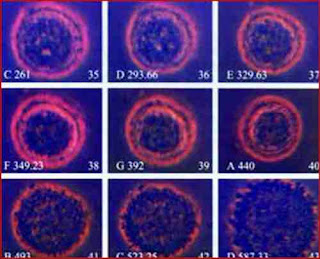 SOUND VIBRATIONS AFFECT THE ELECTROMAGNATIC FIELD OF THE CELL
A real picture of a cell starts to have an electromagnetic field around it because of certain words, which means that it starts to be more active than before! 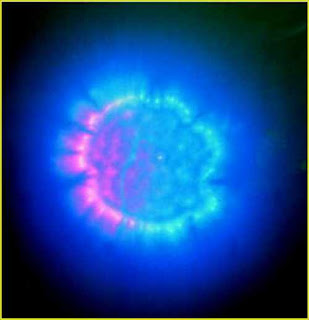 A blood cell, affected by the human voice, the electromagnetic field around it changes and whenever there are certain limited vibrations, the cell activates again.

A blood cell, being photographed by a Karlian camera, there appears around a kind of halo (circle of light) changing according to the sound received. 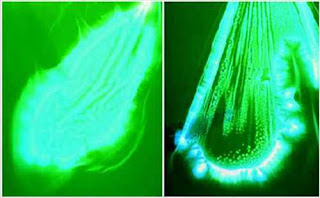 The experiences show us, that when we hear a word, the immune blood cells are affected and with certain words they start to be more active and resistant to all kind of illness. It was also proven that the voice of the patient himself is the most affective! 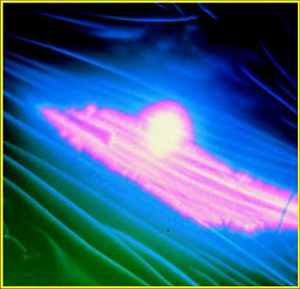 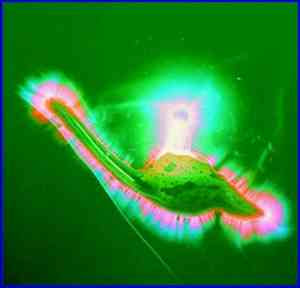 THE TRANSPORTATION OF THE HEALING INFORMATION
Each aya (Qur’anic verse) contains a certain amount of information to heal certain illness. To guarantee the transport to all cells of the body, there must be a transporter. The best transporter for that is water, honey, olive oil as those are blessed products, God Al-Mighty put certain healing information into them. If we affect them by the sound of the Qur’an, the level of energy inside them will increase. They will store the healing information and transport it to the body cells and this will increase the probabilities of healing by God’s will! 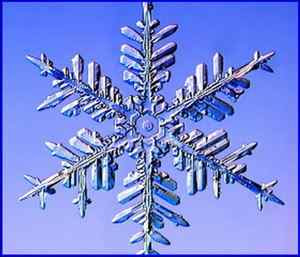 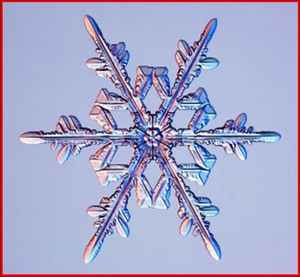 CRISTALS OF WATER (FROZEN) AFFECTED BY THE SOUND
Water has a very high capacity to store any sound and transport it to the body’s cells, we should remember that 70% of the human body consist of water! So, the reciting of the Qur’an on the water will increase it’s energy and it’s capacity of healing, followed by transporting the Qur’anic healing information to all the cells of the body!!!

Honey and Olive Oil Affected by Sound!
During the recitation of the Qur’an onto honey, olive oil or other plant’s oil, the level of energy will increase and the atoms of these healing products will be influenced highly, which will increase their capacity of healing! These products have the capacity to transport the healing information from the Qur’an into all body cells.

HOW ILLNESS, DISEASE OR SICKNESS DO HAPPEN ?
I found during my long research and deep study of the Qur’anic aya’s (verses) that all different kind of illness are in fact different faces of one illness!
God Al-mighty put a program in each cell which makes the cell function all life long. This program consists of a complexity of information. When any outside information enters the cell by a virus or others, then the program of the cell will be affected negatively or positively. Therefore, any damage which happens to the program by a negative affect will appear as an illness, sickness or disease. 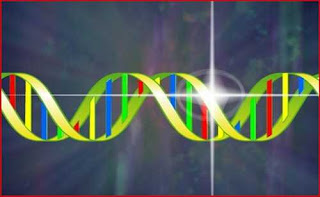 THE DNA IS ALSO AN INFORMATION
In each cell there is a strip of information called DNA consisting of more than 3000 millions information!!

THE VIRUS IS BUT AN INFORMATION
The virus is but a collection of information created by God Al-mighty in order to do a certain job. In each single virus a program enables it to affect certain cells. 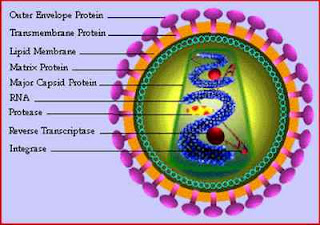 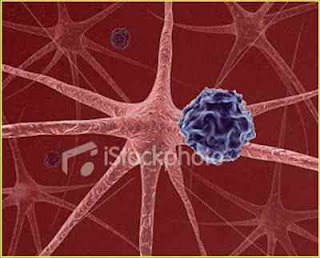 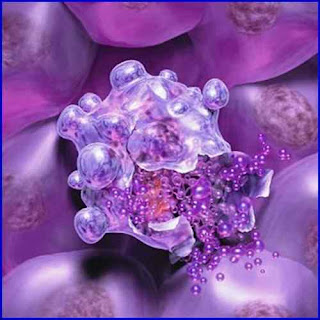 When a virus attacks the cell, it enters its own program inside the program of the cell, which will affect the healthy program and disturb it or damage it through obliging the healthy cell to copy lots of the virus program.

A CELL EXPLOSES BECAUSE OF THE INCREASING OF THE VIRUSES INSIDE
After the increase of the virus inside the cell, it will use the cell program and its materials to make many copies of itself, then it will explode, freeing thousands of viruses, which in its turn enter to other healthy cells to do the same work.

HOW THE VIRUS WORKS
The virus has no weapon, all what it has is only a strip of information, so the war is “INFORMATION WAR” This is the idea of healing by the Qur’an, because the Qur’an has the opposite information of any damage that has occurred to the healthy cell. 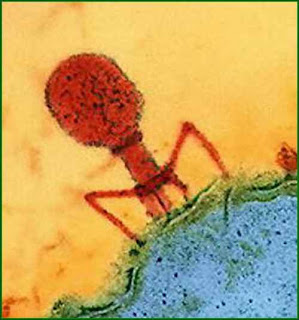 God Al-Mighty said:
The pattern on which Allah has made mankind; no change (let there be) in the work (wrought) by Allah; that is the straight (perfect) religion; but most among mankind don’t know” (Surah 30 – aya 30)
The scientists assure us that the brain is programmed on pure healthy nature!

THE QUR’AN IS REPROGRAMMING THE BRAIN CELLS
The Creator of illness is the One who created mankind, so He puts secret knowledge in His book. We don’t understand, but it affects all kind of illness and cures them by His will! This could be done by re-balancing the cells that were corrupted. As we said, any sickness, illness or disease is the result of a certain damage in the program of the cell (reprogramming), depending on the kind of the illness, sickness or disease. 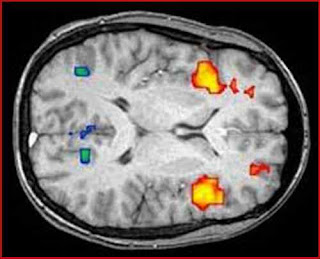 THE QUR’AN IS RE-BUILDING THE IMMUNE SYSTEM OF THE BODY
The immune system of the body is also a program. Therefore, when the virus enters the cell it will affect this system and cause damages. When we read certain ayat (verses) of the Qur’an,a the sound that enters the body cells, re-programs the immune system by the power of the information carried inside the Qur’anic voice, and becomes more capable to recognize the illness and destroys it. That’s how the healing by the Qur’an happens!!!

THE RESULTS OF RESEARCH AND THE ADVICES
1- Putting the scientific foundation for the healing by the Qur’an.
2- The necessity of doing many scientific experiences on the effect of certain Ayas (Qur’anic verses).
3- Proving the Qur’anic miracles in the science of healing (The healing power in the Qur’anic words).
4- The healing by Qur’an includes all kind of physical and psychological illness.
5- To encourage the self healing, which means, that the sick person practices reading the Qur’anic healing Ayas (verses) on himself, if possible.
6- The necessity of reading the Qur’anic healing Ayas (verses) on water, honey, olive oil and other plants oil, which has then to be taken by the patient.
7- All kind of illness is information and it’s healing could be done by information also, and here we come to discover a new medicine called; “THE MEDECINE OF INFORMATION”.