Noble Quran on the Cerebrum: Lying is generated from the person's forehead 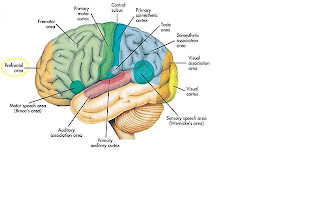 Allah has said in the Quran about one of the evil unbelievers who forbade the Prophet Muhammad from praying at the Kaabah:

I also called to mind some of the traditions of the Prophet (Peace be upon him), such as: “O Allah! I am your servant and the son of your servant and the son of your bondmaid, my nasiyah (front of the head) is in Your Hands…” and: “ I seek refuge with you from the evil of everything whose nasiyah is in Your Grasp.” and: “Horses have goodness embedded in their nasiyahs, till the Day of Resurrection.”

From the meanings of these texts we can conclude that the nasiyah is the center of control and guidance of both human and animal behavior.

If we look into the skull at the front of the head, we will find the prefrontal area of the cerebrum. What does physiology tell us about the function of this area? A book entitled Essentials of Anatomy & Physiology says about this area, “The motivation and the foresight to plan and initiate movements occur in the anterior portion of the frontal lobes, the prefrontal area. This is a region of association cortex...” Also the book says, “In relation to its involvement in motivation, the prefrontal area is also thought to be the functional center for aggression....”

The prefrontal cortex constitutes the bulk of the frontal lobe of the brain, and its function is involved in the making of one’s personality. It is also considered as a superior center among the centers of concentration, thinking and memory. It plays a significant role in the person’s emotion and it is somehow concerned with initiative and discrimination.

The cortex is situated directly behind the forehead; it is hidden deep in the front of the head. Thus the prefrontal cortex directs some of the human behaviour that reflects one’s personality, with respect to being truthful, lying, right, wrong…etc. It also distinguishes between these virtues and vices and urges one to take the initiative whether with good or evil intent.

Professor Keith L. Moore, illustrating this Scientific Miracle, says: “The information we now know about the function of the brain, was not mentioned throughout history, nor do we find anything about it in the medical books. Should we survey all the medical literature during the time of the Prophet (Peace be upon him) and several centuries thereafter, we would find no mention of the function of the frontal lobe (nasiyah), or an explanation of it or a statement about it except in this Book (the Holy Qur’an), which indicates that such information is of the Knowledge of Allah, the Almighty, Who knows everything, and that Muhammad is Allah’s Messenger. In fact during an international conference held in Cairo in 1980, Professor Keith L. Moore said: “The comparative anatomical study of human and animal brains shows that the nasiyah has the same function: It is the center of the control and guidance in both man and animals that have brains.

Prominent commentators of the Holy Quran had to interpret the explicit text metaphorically because they did not know this secret, in order to safeguard the Qur’an from being accused of lying by people who were ignorant of this fact throughout the past centuries. The fact that the nasiyah is the center of control and guidance in both men and animals is clearly mentioned in Allah’s Book and the Sunnah of his Messenger (Peace be upon him).

Who, then, told Muhammad (Peace be upon him) in particular, of this secret and this fact? It is the Divine Knowledge that no falsehood can approach from before or behind it. It is a witness from Allah that the Qur’an is from Him and was revealed with His Knowledge.
Posted by Rizal Abu Bakar at 10:49 AM

YOur blog is great! I look up to it.